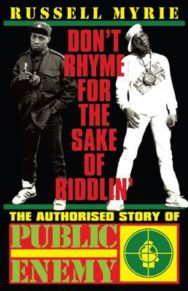 Don’t Rhyme for the Sake of Riddlin’: The Authorised Story of Public Enemy

Public Enemy are one of the greatest hip-hop acts of all time. Exploding out of Long Island, New York in the early 1980s, their firebrand lyrical assault, the Bomb Squad’s innovative production techniques, and their unmistakeable live performances gave them a formidable reputation. They terrified the establishment, and have continued to blaze a trail over a twenty year period up until the present day. Today, they are more autonomous and as determined as ever, still touring and finding more ingenious ways of distributing their music. Russell Myrie has had unprecedented access to the group, conducting extensive interviews with Chuck D, Flavor Flav, Terminator X, Professor Griff, the Shocklee brothers, and many others who form part of their legacy. Urgent, incisive and definitive, Don’t Rhyme for the Sake of Riddlin’ is the ultimate guide to the group that tells it like it is, and insists that hip-hop is a lethal weapon for the social and politically conscious. Russell Myrie shows how, in a time of rampant profligacy and meaningless posturing in hip-hop, their diatribes still cut to the heart of the American dream, and they are as important and necessary as ever.

Russell Myrie wrote for Touch and Hip-Hop Connection before joining The Voice as Arts Editor, and regularly contributes to the Independent. He has been a fan of hip-hop music since the age of 10.