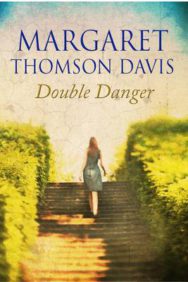 Margaret Thomson Davis’ new novel is a gripping saga with plenty of twists. “Double Danger” tells the story of Jessica McKay, who moves to Saudi Arabia to be with her new husband, Brian. At first it seems like paradise, but after the birth of their two children, she feels threatened by terrorist attacks on the luxurious compound where they live and decides she must return home with the twins, settling in an estate that Brian has inherited in the Campsie Hills near Glasgow. However, back in Scotland, things are not what they seem and the real danger begins. Jessica’s children mistrust the attractive gardener, Patrick, believing that his charming manner conceals sinister schemes – and when a terrible accident befalls their father on his way home to see his family, they fear their worst suspicions are about to be realised. “Double Danger” is vintage Margaret Thomson Davis – a story of suspense, betrayal and murder.

Margaret Thomson Davis is Glasgow’s favourite romantic novelist. She is the author of more than 20 novels, the best known of which is The Breadmakers, first published in 1972 and still in print. Her other books include The Clydesiders Trilogy, The Tobacco Lords, A Deadly Deception, Goodmans of Glassford Street and Red Alert.