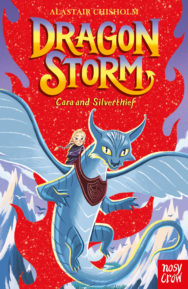 The second book in a thrilling, magical, and action-packed new fantasy series, illustrated throughout and perfect for 7 – 9 year olds!

In the land of Draconis, there are no dragons.

Once, there were. Once, humans and dragons were friends, and created the great city of Rivven together.

But then came the Dragon Storm, and the dragons retreated from the world of humans.

To the men and women of Draconis, they became legends and myth.

Cara has spent her life on the streets, relying on her wits – and a mysterious voice that seemed to live inside her head – for survival. She’s amazed when she learns that the voice actually belongs to a dragon – her dragon – and she’s invited to join a hidden society, the Dragonseer Guild, for those who can summon their own dragon.

But Cara isn’t used to having friends, and so when she and her dragon Silverthief uncover a dangerous secret, they must decide who they can trust… and their lives will depend on it.

An exciting new fantasy series from the highly acclaimed author of Orion Lost, brilliantly illustrated throughout, and perfect for fans of Beast Quest and How to Train your Dragon.

Alastair is a children’s author and puzzle creator. As a puzzle creator he wrote quite a lot of books of Sudoku and other puzzles for kids and grown-ups, and as an author he writes picture books and middle-grade fiction. Alastair lives in Edinburgh with his wife (who is lovely), two teenagers (who are lovely but very loud), and a cat named Maudie, who is yowling at him even though there is clearly food in her bowl, look, it’s right there, look. His hobbies include writing and playing games on his phone when he should be writing. You can follow him on Twitter @alastair_ch, if you like.

Eric Deschamps is an illustrator of middle-grade and early reader books in the science fiction and fantasy genre, as well as a card artist for the popular collectible card game Magic: the Gathering. His illustrations have been recognized in ‘Illustrators 61’ (Society of Illustrators) and 9 volumes of ‘Spectrum: Best In Contemporary Fantastic Art.’ Aside from art, Eric enjoys coaching a special needs basketball team each year and writing children’s stories of his own.