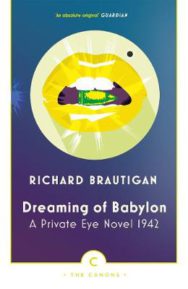 When you hire C.Card, you have scraped the bottom of the private eye barrel. He is a detective of sorts. When he’s hired to steal a body from the morgue, he needs to stop dreaming, find bullets for his gun and get there before someone else does. Not since Trout Fishing in America has Brautigan so successfully combined his wild sense of humour with his famous poetic imagination. In this parody of the hard-boiled crime novel, the adventures of seedy, not-too-bright C.Card are a delight to both the mind and the heart.

Reviews of Dreaming of Babylon: A Private Eye Novel 1942

Richard Brautigan was born in Tacoma, Washington where he spent much of his youth, before moving to San Francisco where he became involved with other writers in the Beat Movement. During the sixties he became one of the most prolific and prominent members of the counter-cultural movement, and wrote some of his most famous novels including Trout Fishing in America, Sombrero Fallout and A Confederate General from Big Sur. He was found dead in 1984, aged 49, beside a bottle of alcohol and a .44 calibre gun. His daughter, Ianthe Brautigan, has written a biography of her father, You Can’t Catch Death.