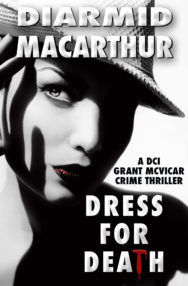 Home > Fiction from Scotland > Crime and Mystery > Dress for Death

THE BODY
A young woman murdered in the changing room of a local supermarket. A suspected terrorist incident. And there may be a serial killer at work.

THE ENEMY WITHIN
There are no easy answers, and it soon becomes apparent that someone in his team is leaking information. Loyalties increasingly strained, answers remain just out of reach.

THE ENEMY WITHOUT
Confusion and paranoia reign supreme, and Grant’s personal life starts to spiral out of control. With the killer almost within his grasp, he finds himself in mortal danger. Will he be the final victim?

This is the 2nd thrilling book in the DCI Grant McVicar series.

Hailing originally from Campbeltown, Diarmid MacArthur is an author now based in Renfrewshire, where he has run his optician`s business for over thirty years. Having always believed good communication to be one of the key factors in dealing with the public, Diarmid has turned that skill to writing.

Set in his home territory of the West of Scotland, Diarmid has drawn on his extensive network of friends and business contacts, as well as his personal experiences, to research meticulously the details for his compelling tales of complex relationships, intrigue and, of course, brutal, bloody murder!

When not engaged in his business or writing his novels, Diarmid is also a musician, a poet and a rower. He lives with his wife and his two teenage daughters just outside the attractive village of Lochwinnoch.