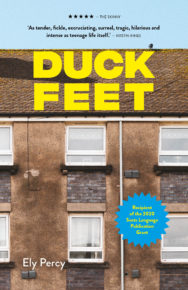 Twelve-year-old Kirsty Campbell used to like school – that is until she started first year at Renfrew High. Set in the mid-noughties and narrated in a Renfrewshire dialect, Duck Feet is an episodic novel comprised of 65 linked short stories, all following the lives of working-class school-girl Kirsty and her pals as they traverse from first to sixth year of high school.

Duck Feet uses humour to deal with hard-hitting issues such as drugs and bullying as well as first love, sexuality, teenage pregnancy, and the pressure to succeed socially and academically. Relatable, quirky, and sometimes heartwrenching, these stories paint an authentic portrait of growing up working class in Scotland.

Ely Percy’s first publication was in Big! magazine in 1994. Since then, they’ve released a memoir (Cracked, 2002), graduated with distinction from Glasgow University’s MPhil in Creative Writing (2004) and contributed over fifty short stories to literary journals. Their debut novel Vicky Romeo Plus Joolz was published in March 2019.