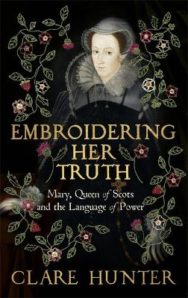 Home > Sports & Hobbies > Embroidering Her Truth: Mary, Queen of Scots and the Language of Power

Embroidering Her Truth: Mary, Queen of Scots and the Language of Power

I felt that Mary was there, pulling at my sleeve, willing me to appreciate the artistry, wanting me to understand the dazzle of the material world that shaped her.At her execution Mary, Queen of Scots wore red. Widely known as the colour of strength and passion, it was in fact worn by Mary as the Catholic symbol of martyrdom.In sixteenth-century Europe women’s voices were suppressed and silenced. Even for a queen like Mary, her prime duty was to bear sons. In an age when textiles expressed power, Mary exploited them to emphasise her female agency. From her lavishly embroidered gowns as the prospective wife of the French Dauphin to the fashion dolls she used to encourage a Marian style at the Scottish court and the subversive messages she embroidered in captivity for her supporters, Mary used textiles to advance her political agenda, affirm her royal lineage and tell her own story.In this eloquent cultural biography, Clare Hunter exquisitely blends history, politics and memoir to tell the story of a queen in her own voice.

Reviews of Embroidering Her Truth: Mary, Queen of Scots and the Language of Power

In this charmed feat of imagination and learning, the beauties and disasters of Mary Stuart's life unfold again, and her nimble brain and fingers are alive. It is a personal project, with the flavour of a memoir, but dense with fascinating information that the less inspired might miss. Clare Hunter is at ease in this glittering, alien world, and moves through it as a woman, with Mary's 'joyouestie' in mind as well as her suffering. — Hilary Mantel (January 2022) Select praise for THREADS OF LIFE: An astonishing feat * Sunday Times * Triumphant * Mail on Sunday * An inspiring and moving sideways look at history * Sunday Express * Astonishing . . . so well written * Times Literary Supplement * A beautifully considered book . . .Clare Hunter has managed to mix the personal with the political with moving results' — Tracy Chevalier

Clare Hunter has been a banner-maker, community textile artist and textile curator for over twenty years and established the community enterprise NeedleWorks in Glasgow. Her first book, Threads of Life, won the Saltire First Book Award, was a Waterstones Scottish Book of the Month and a Radio 4 Book of the Week.