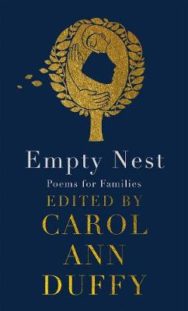 ‘Duffy is magnificent, grounded, heartfelt, dedicated to the notion that poetry can give us the music of life itself’ ScotsmanIn this stunning anthology Carol Ann Duffy has selected 99 poems exploring parenting.The special bond between parent and child is both powerful and unique. And yet there is a time when that bond must ease, where our grip on that dear one must loosen, when we must let them go whether we are ready to or not.In Empty Nest, a beautiful selection of modern and classic poems range along the tender line between parent and child, covering growing old, the deep love of a parent, the everyday of family life and leaving home to live an independent life, but also unthinkable grief, loss and estrangement. Some of our very favourite poets feature in the selection, such as Elizabeth Bishop, Jackie Kay, Simon Armitage, Shakespeare, Imtiaz Dharker, Seamus Heaney and Don Paterson.These poems are by turns wry, affecting, profound, melancholy and wise; they will console and comfort those suddenly facing a house that’s much cleaner but also much quieter than it was. There is something here for every reader to treasure.

Carol Ann Duffy is the most humane and accessible poet of our time * Guardian * Carol Ann Duffy is arguably the nation's favourite living poet — Jeanette Winterson, author of Frankissstein Duffy is magnificent, grounded, heartfelt, dedicated to the notion that poetry can give us the music of life itself * Scotsman * Wonderful . . . a poet alert to every sound and shape of language * Telegraph *

Carol Ann Duffy lives in Manchester, where she is Professor and Creative Director of the Writing School at Manchester Metropolitan University. She has written for both children and adults, and her poetry has received many awards, including the Signal Prize for Children’s Verse, the Whitbread, Forward and T. S. Eliot Prizes, and the Lannan and E. M. Forster Prize in America. She was Poet Laureate of the United Kingdom 2009-2019. In 2011 The Bees won the Costa Poetry Award, and in 2012 she won the PEN Pinter Prize. She was made a DBE in the 2015 New Year’s Honours list.