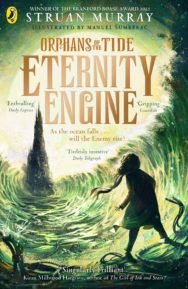 The final instalment in the breathtaking Orphans of the Tide trilogy, which The Times calls ‘Unputdownable’.

The seas have parted to reveal the remains of humanity’s lost empire and opened a path from Shipwreck Island to the Enemy’s City. Now only Ellie Lancaster and her orphan friends can prevent a terrible war.

As Kate marches north at the head of her army, panic infests the City as the Enemy’s strength grows. For the parting of the seas has also uncovered the Eternity Engine, a dreadful machine from before the Drowning, with the power to remake the world – or destroy it forever . . .

The critically-acclaimed Orphans of the Tide trilogy reaches its spine-tingling climax and dramatic conclusion. Perfect reading for fans of His Dark Materials or Vashti Hardy.

Struan Murray is Scottish and grew up in Edinburgh, the youngest of a large, rowdy family of redheads. His first publication was a drawing in Pingu Magazine, aged seven, but his debut novel, Orphans of the Tide has attracted rather more critical acclaim. When he’s not writing, Struan is a lecturer at the University of Oxford.

Manuel Šumberac was born in 1988 in Pula, Croatia. He obtained a Masters in Animation and New Media from the Academy of Fine Arts in Zagreb. He is a member of Filmmakers Association of Croatia. Manuel works in the fields of animation and illustration to produce animated films, music videos, children’s books and book covers. He has received numerous awards for his work.