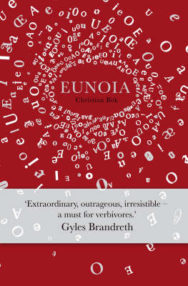 ‘Eunoia’, which means ‘beautiful thinking’, is the shortest word in the English language to contain all five vowels. This book also contains them all, but never at the same time. Each of Eunoia’s five chapters is univocalic: that is, each chapter uses only one vowel. A triumphant feat, seven years in the making, this uncanny work of avant-garde literature is one of the most surprising and awe-inspiring books of the year. A challenging feat of composition and technical skill, Bok has worked this into a series of compelling narratives and rhythms. Writing is inhibiting. Sighing, I sit, scribbling in ink this pidgin script. I sing with nihilistic witticism, disciplining signs with trifling gimmicks – impish hijinks which highlight stick sigils. Isn’t it glib? Isn’t it chic?

Extraordinary, outrageous, irresistible – a must for verbivores. — Gyles Brandreth Amazing… impressive… It's beautiful, its funny and it's moving. * Globe and Mail * Linguistically daring and delightfully inventive…engaging, witty and moving. — Stuart Kelly * Scotland on Sunday *

Christian Bok began writing in his early twenties, while earning his B.A. and M.A. degrees at Carleton University. He returned to Toronto in the early 1990s to study for a Ph.D. in English literature at York Universtiy. Crystallography, Bok’s highly acclaimed poetry and prose book published in 1994.