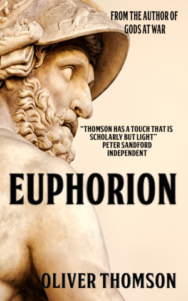 2500 years ago, in the year that King Darius of Persia died, a man called, Euphorion, was born in Greece. Witness to some of the most glorious episodes of ancient Athens, the wars, the crimes, the political intrigues, he expected war, hoped for love and found murder and betrayal on his doorstep instead.

Euphorion is the first fiction novel by distinguished Cambridge historian, Oliver Thomson. Part fiction, part travelogue, Euphorion is an imaginative journey that will also benefit travellers to Greece and Turkey.

LATEST ISSUE: From the Shadows

The Dark Remains: David Robinson Reviews
Welcome to Cooper
Fatal Duty
Break in Case of Silence: New Writing Scotland
The Puffin Portal: An Interview with Vashti Hardy
Slaves and Highlanders
Terms of Restitution: An Interview with Denzil Meyrick
The Purified
Look Where You Are Going, Not Where You Have Been
Sins of the Father: Debut Crime Fiction with Sharon Bairden
Life is Elsewhere, Burn Your Flags
Death of a Selkie
Some Rise by Sin
Dress for Death
Dark Travellers