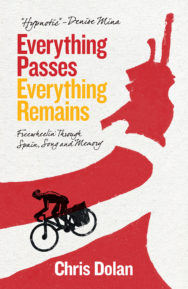 Home > Biography and Autobiography > Everything Passes, Everything Remains: Freewheeling through Spain, Song and Memory

Everything Passes, Everything Remains: Freewheeling through Spain, Song and Memory

How would any of us feel if we could meet our 16-year-old selves, a ghost on the road?This book is a confluence of journeys, made by Chris, his friends, and writers before him – especially Laurie Lee and the long walk he began one midsummer morn. It’s a bit about cycling, a bit about walking, and a bit about buses. It’s definitely about Spain, but a little bit about Scotland, too. It’s a kind of travelogue, over time, and through some lesser-known parts of Spain. It’s an obsession with Spain’s poets and its history, from the Inquisition to the Civil War and to its current ‘interesting times’. But mostly it’s about growing up and growing older. About friendship, loss, music, writing. And it’s about memory, and the tricks it plays. This is a shared memoir of how the journeys began and how they all ended, threaded with stories, histories, verses and short reflections. Freewheeling through Spain, Song and Memory.

Award-winning novelist, scriptwriter, playwright and lecturer Chris Dolan was born in Glasgow, where he lives and works today. A former International Consultant for UNESCO, he has had a lifelong fascination with Spain. His numerous writing awards include the McKitterick Prize for his first novel, Ascension Day, the Macallan/Scotland on Sunday Short Story Prize, the Robert Louis Stevenson Memorial Award and a shortlisting for a Saltire Society literary award.