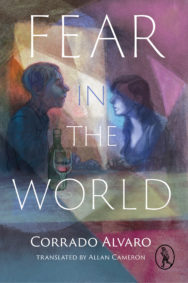 Home > Fiction from Scotland > Fear in the World

Fear in the World

Corrado Alvaro’s Fear in the World was published a decade before Orwell’s 1984, but is not well known outside Italy, perhaps because of the timing of the publication just before the Second World War. Alvaro had visited the Soviet Union as a journalist, but was probably motivated to write this dystopian novel by aspects of modernity that concerned him, particularly the use of fear for political purposes, not only in the Russia. He is interested in the psychology of fear and the extent to which individuals and the crowd participate in their own regimentation. The names of countries, cities and leading political figures such as Stalin are never referred to, but as in the works of Orwell, they are clearly there from the descriptions: the author was writing in a Fascist country against a Fascist censor and had to cut his cloth accordingly. This is a dark novel, not quite as dark as 1984, but it is more claustrophobic. The feel of inevitability is there from the first page, and it is experienced as we do in real life. The imagined takes us closer to where we really are. There is a love affair at the core of this novel, which is the cause of their problems, or quite possibly perceived by the lovers as the cause and therefore became the cause. The modern Leviathan appears to be a well-oiled machine, but towards the end it becomes clear that this is merely an appearance of efficiency and omniscience, but appearances can be powerful. Alvaro is particularly interested in how the state uses quasi-religious mechanisms and rituals to assert its power. The central character returns to the country after a long period abroad, and see things initially through foreign eyes, living a life similar to the one Alvaro did when in Russia. He is not a natural rebel, and very much wants to fit in, but it seems difficult to achieve. The regime boasts that it has an ally in history, but destiny is elusive, however much the characters feel that they are driven by it.

Corrado Alvaro was born in San Luca, Calabria in 1895, the son of a primary school teacher. When he was ten, he was sent to the Jesuit College in Frascati where he mixed with sons of the upper circles. In 1910 he was expelled for reading a banned work, Carducci’s Hymn to Satan, but he was already well-read and had studied avidly, even producing his first poetry. He had completed his studies in Calabria, and enlisted in the army in 1915, only to be badly wounded in 1916. He then embarked on his precocious career as a journalist, rising to editor of Il Resto del Carlino and then moving to Milan to work for Corriere dells Sera in 1919. In 1921 he became the foreign correspondent of Amendola’s Il Mondo in Paris, and in 1925 he signed Benedetto Croce’sManifesto of the Antifascist Intellectuals. His literary career advanced until 1951, when he won Italy’s most prestigious literary prize, the Premio Strega, with his novel Almost a Life. In 1954, he was taken ill with stomach cancer which spread to his lungs, and in 1956 he died at his home in Rome where he left behind several unfinished novels.