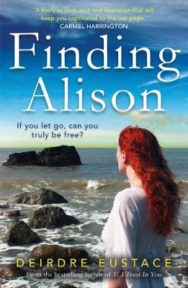 In Carniskey, a small fishing village in Ireland, the community is divided, wracked by grief and guilt; love and resentment; despair and hope. Sean Delaney has been missing at sea for three years, and no one – least of all his grieving wife, Alison – knows what really happened to him. Having lost her husband, her financial security, and having grown distant from her daughter, Alison feels alone and estranged from the villagers. Sean’s mother has not spoken since her house was burgled after his disappearance, and Alison’s only friend, Kathleen, harbours secrets of her own. Isolated by their stunning, yet often cruel, surroundings, the community is forced to look inwards. But when artist and lifelong nomad William comes to town, he offers Alison a new perspective on life – and love. What she doesn’t realise is that strangers have secrets of their own, and William’s arrival threatens to unearth the mysteries of the past.A story of courage and humanity, we follow a community through their struggles and triumphs in love, loss and betrayal.As each of the characters strives to find their own sense of belonging, they are led to the realisation that it is only through the truth that they can truly find happiness.

Deirdre Eustace, is a native of Bonmahon, Co Waterford. Her poetry and short stories have appeared in a variety of publications including The Waterford Review, Volumes 1, 2 and 3; Under Brigid’s Cloak; Gathering Together; Ireland’s Own; Galloping On; Syllables and the American White Star Journal. Her work has been broadcast on both local and national radio. Deirdre’s first novel, If I Trust in You, described by the Irish Independent as ‘tense and gripping… a riveting debut’ was published in July, 2009. It remained in the top sellers list for several months and won a Publishing Ireland ‘Book of the Month’ Award. With over twenty years experience as a writer, editor and proofreader, Deirdre is a full member of the Association of Freelance Editors, Proofreaders and Indexers (AFEPI) Ireland. Finding Alison is her second novel.