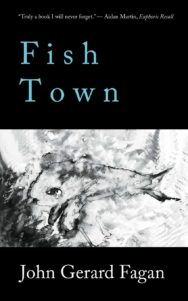 “Disillusioned with life in Glasgow, I sold everything I had and left for a new life in a remote fishing village in Japan. I knew nothing of the language or the new land that I would call home for the next seven years.”

An experimental memoir written entirely on John’s phone, Fish Town is a powerhouse of raw emotions. It reads like a book of poetry or a long text message. In the tone of Bukowski’s Post Office, the book captures the experiences of a Scottish man in Japan with humor, wit, honesty, and by all means without an ounce of political correctness.

John Gerard Fagan is a Scottish writer from Muirhead in the outskirts of Glasgow, who currently lives in Edinburgh.

He has published close to a hundred short stories, essays, and poems in Scots, Scottish Gaelic, and English. Fish Town is his first book, detailing his life in Japan from 2013–2019.

The Fish Town cover art is a painting called ‘Forever Lost’ from 2005, painted by John on an old record sleeve.