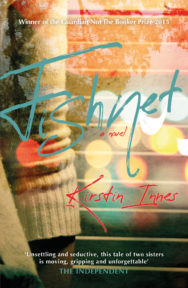 Twenty-year-old Rona Leonard walks out of her sister Fiona’s flat and disappears.Six years on, worn down by a tedious job, child care and the aching absence in her life, Fiona’s existence is blown apart by the revelation that, before she disappeared, Rona worked as a prostitute. Determined to uncover the truth, Fiona embarks on a quest to investigate the industry that claimed her sister. Drawn into a complex world, Fiona’s life tilts on its axis as she makes shocking discoveries that challenge everything she’s ever believed …Bittersweet, sensual and rich, Fishnet is a beautifully told story of love and grief, interwoven with a meticulous, controversial account of the sex industry and its workers. An outstanding piece of fiction, it questions the ways in which we perceive women, their interactions with the world and with each other.

Kirstin Innes is an award-winning writer, journalist and arts worker living in the west of Scotland. She founded the Glasgow literary salon Words Per Minute, and has had short stories published in a number of anthologies and commissioned by BBC Radio 4.