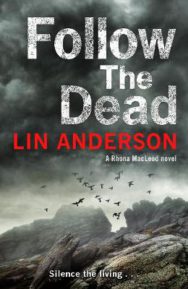 Follow the Dead is the thrilling twelfth book in Lin Anderson’s Rhona MacLeod series.On holiday in the Scottish Highlands, forensic scientist Dr Rhona MacLeod joins a mountain rescue team on Cairngorm summit, where a mysterious plane has crash-landed on the frozen Loch A’an. Added to that, a nearby climbing expedition has left three young people dead, with a fourth still missing.Meanwhile in Glasgow, DS McNab’s raid on the Delta Club produces far more than just a massive haul of cocaine. Questioning one of the underage girls found partying with the city’s elite reveals she was smuggled into Scotland via Norway, and it seems the crashed plane in the Cairngorms may be linked to the club. But before McNab can discover more, the girl is abducted.Joined by Norwegian detective Alvis Olsen, who harbours disturbing theories about how the two cases are connected with his homeland, Rhona searches for the missing link. What she uncovers is a dark underworld populated by ruthless people willing to do anything to ensure the investigation dies in the frozen wasteland of the Cairngorms . . .

Shades of The Wicker Man, with a touch of Agatha Christie. Superb * Daily Mail * The bleak landscape is beautifully described, giving this popular series a new lease of life * The Sunday Times * Lin Anderson is one of Scotland's national treasures – don't be fooled by comparisons, her writing is unique, bringing warmth and depth to even the seediest parts of Glasgow. Lin's Rhona MacLeod is a complex and compelling heroine who just gets better with every outing — Stuart MacBride An outstanding thriller . . . The pace is beautifully judged, and though there are plenty of twists and turns, the reader never feels left behind * Undiscovered Scotland *