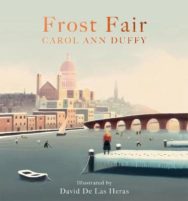 It is a snowy London day in The Great Winter of 1683. We follow our bold narrator as she explores `the town on the Thames’, a thousand tents and dancing fires lit on the frozen water with jubilant residents and lively festive revelry. All is a fete upon the ice as she sees jugglers, dancing bears, palm readers and even a merry wedding. Her journey leads her to meet many new companions with whom to spend a starry night upon the river, where they sleep with no inkling of who will be looking down on them in the morning light . . .Carol Ann Duffy’s new Christmas poem, Frost Fair is inspired by the fairs held on the River Thames in London as it froze over in the uncommonly cold winters of the Little Ice Age. This delightful, moving new poem captures the inventiveness of a great city and the drama of winter. Beautifully illustrated by David De Las Heras,Frost Fair is an irresistible read for our festive season.

Carol Ann Duffy lives in Manchester, where she is Professor and Creative Director of The Writing School at Manchester Metropolitan University. She has written for both children and adults, and her poetry has received many awards, including the Signal Prize for Children’s Verse, the Whitbread, Forward and T. S. Eliot Prizes, the PEN Pinter Prize, and the Lannan and E. M. Forster Prize in America. Her other beautifully illustrated Christmas poems include Another Night Before Christmas, Mrs Scrooge, Wenceslas, Bethlehem, Dorothy Wordsworth’s Christmas Birthday and The Wren-Boys. She was appointed Poet Laureate in 2009. Her collections include The World’s Wife, Love Poems, Rapture and The Bees, which won the Costa Poetry Award.