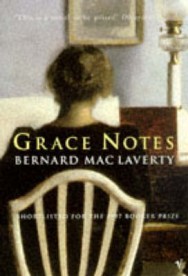 Returning to Belfast after a long absense, to attend her father’s funeral. Catherine McKenna – a young composer – remembers exactly why she left: the claustrophobic intimacies of the Catholic enclave, her fastidious, nagging mother, and the pervading tensions of a city at war with itself. She remembers a more innocent time, when the Loyalists Lambeg drums sounded mysterious and exciting; she remembers her shattered relationship with the drunken, violent Dave, she remembers the child she had with him, waiting back in Glasgow. This is a novel, about coming to terms with the past and the healing power of music, “Grace Notes” is a master story-teller’s triumphant return to the long form: a powerful lyrical novel of great distinction.

Bernard MacLaverty was born in Belfast in 1942. He worked as a lab technician in the anatomy department at Queen’s University for 10 years before studying English and training as a teacher. In 1975 he went to live in Scotland with his wife, Madeline, and their four children. MacLaverty has published five collections of short stories – Secrets, A Time to Dance, The Great Profondo, Walking the Dog and Matters of Life & Death – and four novels: Lamb, Cal, The Anatomy School and Grace Notes, which was shortlisted for the Booker Prize and won the Saltire Scottish Book of the Year Award. He has written for radio, television and screen. His short film Bye Child won a BAFTA. He lives in Glasgow.