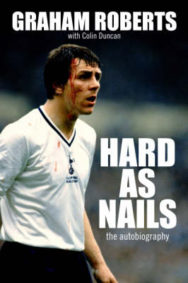 Graham Roberts is a true football legend. Utterly uncompromising both on and off the pitch for Tottenham Hotspur, Chelsea and Rangers, Roberts had a talent which was the envy of many. Now he tells the full story of his incredible career and also of the high profile court cases which he took on and won.Robbo has always been a winner. He became the most expensive player in non-league history when he signed from Weymouth for GBP 100,000. At Spurs he won two FA Cups, the UEFA Cup and 6 England caps. He lost three teeth in the epic 1981 3-2 FA Cup Final win over Man City following a clash with team-mate Chris Hughton but he refused to come off despite doctor’s orders. And, famously, he put Arsenal striker Charlie Nicholas in the stand.When Graham Roberts fell out with new Spurs manager David Pleat, he headed north of the border to become a key part of the Souness revolution at Rangers. Roberts soon became a cult-hero at Ibrox with his supporters prepared to do anything for him…even organising a vigilante style attack on the Chinese carry-out delivery driver who broke into his house!Off the pitch, Roberts found himself in court after conducting the crowd in a rendition of ‘The Sash’, alongside team-mates Terry Butcher and Chris Woods and Celtic striker Frank McAvennie, after an explosive Old Firm clash at Ibrox. At Chelsea, he was also embroiled in a row over cash with Ken Bates and he sent shockwaves through Scottish football when Clyde beat Celtic in the Scottish cup, a magnificent result that was soon overshadowed by a bitter internal dispute which would rip the club apart.”Graham Roberts – Hard As Nails” is the incredible story of one of football’s legendary hard men – and it’s a story as uncompromising as the man himself.

Graham Roberts has had a long and successful career playing for some of the biggest clubs in British football including Tottenham Hotspur, Rangers and Chelsea and won six caps for England. Colin Duncan is a senior sports writer with the Daily Record.