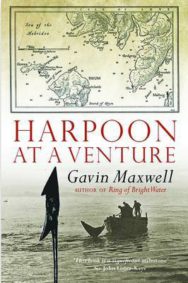 Harpoon at a Venture

A shark fishery based on the tiny Hebridean island of Soay was the beginning of Gavin Maxwell’s enduring love affair with the west coast of Scotland. This, his first book, tells the whole story – the challenge and drama of the shark hunt, the development of catching techniques and equipment, the men who worked with him and some of the frustrations of starting a new enterprise in post-war Scotland. Every chapter is packed with action and anecdote. In each there are also beautifully observed descriptions of sky, sea and the individual islands of the Hebrides as well as their wildlife – from gannets, puffins, Manx shearwaters and fulmars to seals, dolphins and whales.

Reviews of Harpoon at a Venture

'Well overdue for a reissue' – the Herald 'A singularly significant book in my life' – Jim Crumley, Scots Magazine

Gavin Maxwell was born in the south-west of Scotland and was educated at a succession of schools before taking a degree in Estate Management at Oxford. He served with the Special Operations Executive during the Second World War, after which he bought the island of Soay. As well as his famous otter books – Ring of Bright Water and The Rocks Remain – he also wrote the critically acclaimed People of the Reeds, an account of the marsh Arabs of southern Iraq. He died in 1969.