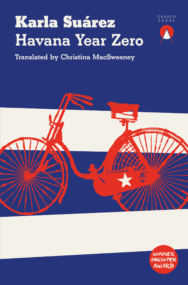 It was as if we’d reached the minimum critical point of a mathematical curve. Imagine a parabola. Zero point down, at the bottom of an abyss. That’s how low we sank.

The year is 1993. Cuba is at the height of the Special Period, a widespread economic crisis following the collapse of the Soviet bloc.

For Julia, a mathematics lecturer who hates teaching, Havana is at Year Zero: the lowest possible point, going nowhere. Desperate to seize control of her life, Julia teams up with her colleague and former lover, Euclid, to seek out a document that proves the telephone was invented by Antonio Meucci in Havana, convinced it is the answer to secure their reputations and give Cuba a purpose once more.

From this point zero, Julia sets out on an investigation to befriend two men who could help lead to the document’s whereabouts, and must pick apart a tangled mystery of sex, family legacies and the intricacies of how people find ways to survive in a country at its lowest ebb.

‘The Name of The Rose is set in Cuba and is now called Havana Year Zero (…) A masterpiece’, Marie Claire (France)

Karla Suárez is a Cuban writer, born in Havana in 1969. She studied classical guitar and has a degree in electronic engineering. Suárez is the author of three collections of short stories, two books that combine travel writing with photography, and four novels. Her books have received many international awards, including the Lengua de Trapo Prize for her 1999 debut novel Silencios (Silences), for which she was also selected among the ten novelists of the year in 2000 by the newspaper El Mundo. The French translation of Silencios was also a finalist for the Insular America Award and Guyana Prize for Literature 2004. Many of her stories have appeared in anthologies and magazines published in Europe, the United States, and Latin America. Several of her stories as well as some of her novels have been adapted for television and theatre. In 2007, she was selected by the Hay Festival as one of the Bogotá39 writers, which groups together the best Latin American authors under the age of 40. Havana Year Zero (2011) is her third novel and has obtained the Prix Carbet of the Caribbean and Tout-Monde and the Insular Book Prize, both in France. It is her first book to be published in English.

Christina MacSweeney received the 2016 Valle Inclán prize for her translation of Valeria Luiselli’s The Story of My Teeth, and her translation of Daniel Saldaña París’ Among Strange Victims was a finalist for the 2017 Best Translated Book Award. Other authors she has translated include: Elvira Navarro (A Working Woman), Verónica Gerber Bicecci (Empty Set; Palabras migrantes/ Migrant Words), and Julián Herbert (Tomb Song; The House of the Pain of Others).