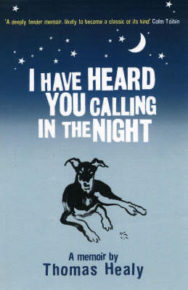 I Have Heard You Calling in the Night

Thomas Healy was a drunk, a fighter, often unemployed, no stranger to the Glasgow police or to the courts. He came from the Gorbals, that byword for hard men and the school of hard knocks, and his life was going nowhere other than downhill. Then one day, he bought a pup – a Doberman. He called him Martin. Gradually man and dog became unshakeable allies, the closest of comrades, the best of friends. Martin, in more ways than one, saved Thomas Healy’s life. This is a story of one man and his dog. Such things can be sentimental. Healy’s is a memoir written with refreshing originality and love.

Reviews of I Have Heard You Calling in the Night

* 'A remarkable and moving new book' Mail on Sunday * 'There are some things, some people, we can never forget. Healy and his memoir fit that bill' The Herald (Glasgow) * 'A gutsy yet soft- hearted memoir… Has 'cult read' written all over it' Eve * 'The book can be compared to the two little gems of canine remembrance JR Ackerly produced in his old age- My Dog Tulip and the novella We Think the World of You' Guardian * 'It shines its torchbeam not on the pathos but on the bonded inseparability. It transcends any urge towards bleakness. This book is a testament to redemption, a kind of prayer, a survivor's thanks' Scotsman * 'Even the most hard- hearted, dog- hating non- believer may be experiencing a lump in the throat when they reach Healy's final pages' Daily Mail

Thomas Healy grew up in the Gorbals, Glasgow in the 1950s. He left school at fifteen and has worked as, among other things, a shunter in a railway yard, a reporter on the Glasgow Herald and a security guard at a meat market. He is the author of a book about boxing, The Hurting Business, and two novels: It Might Have Been Jerusalem and Rolling. He lives in Glasgow.