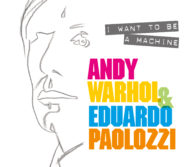 I want to be a machine: Warhol & Paolozzi

This beautifully illustrated book offers a fascinating compare-and-contrast examination of Eduardo Paolozzi and Andy Warhol and their fascination with the machine in their art.

Looking at the way that both artists began in the late 1940s and the years following, the book illustrates their fascination with popular culture and the methods that they used in creating their art. Common to all their methods of making works was their hand-made quality. Even when Warhol made limited-edition books during this period, he would organise colouring-in parties at his favourite café, Serendipity, so as to achieve a sense of naïve uniqueness. Paolozzi made his first bronzes himself in a friend’s garden, because he could not afford the expense of having his sculptures cast in a bronze foundry.