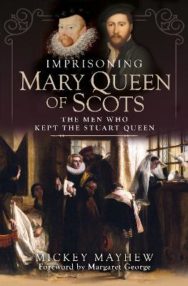 Imprisoning Mary Queen of Scots: The Men Who Kept the Stuart Queen

Imprisoning Mary Queen of Scots covers the lives and careers of the men and women who kept’ Mary Queen of Scots when she was a political prisoner in England, circa 1568/9-1587. Mary’s troubled claim to the English throne – much to the consternation of her dear cousin’ Elizabeth I – made her a mortal enemy of the aforementioned Virgin Queen and set them on a collision course from which only one would walk away. Mary’s calamitous personal life, encompassing assassinations, kidnaps and abdications, sent her careering into England and right into the lap of Henry VIII’s shrewd but insecure daughter. Having no choice but keep Mary under lock and key, Elizabeth trusted this onerous task to some of the most capable – not to mention the richest – men and women in England; Sir Francis Knollys, Rafe Sadler (of Wolf Hall fame), the Earl of Shrewsbury and his wife, Bess of Hardwick, and finally, the puritanical nit-picker Sir Amyas Paulet. Until now, these nobles have been mere bit-players in Mary’s story; now, their own lives, loves and fortunes are laid bare for all to see.From Carlisle Castle to Fotheringay, these men and women all but bankrupted themselves in keeping the deposed Scots queen in the style to which she was accustomed, whilst fending off countless escape plots of which Mary herself was often the author. With the sort of twist that history excels at, it was in fact a honeytrap escape plot set up by Elizabeth’s ministers that finally saw Mary brought to the executioner’s block, but what of the lives of the gaolers who had until then acted as her guardian? This book explains how Shrewsbury and Bess saw their marriage wrecked by Mary’s legendary charms, and how Sir Amyas Paulet ended up making a guest appearance on Most Haunted’, some several hundred years after his death. In that theme, the book also covers the appearances of these men and women on film and TV, in novels and also the various other Mary-related media that help keep simmering the legend of this most misunderstood of monarchs.

Lifelong Londoner Mickey Mayhew has a PhD concerning the online cult surrounding ‘tragic queens’ Anne Boleyn and Mary Queen of Scots. He was co-author on three books relating to Jack the Ripper, published by The History Press; The Little Book of Mary Queen of Scots was also published by The History Press, in January 2015. I Love the Tudors, by Pavilion Books, was released in 2016. He has a semi-regular column in the journal of The Whitechapel Society, having previously been a film and theatre reviewer for various London lifestyle magazines. He has also worked as an assistant researcher on several projects for London South Bank University. His first book for Pen & Sword – House of Tudor: A grisly history – was published in early 2022.