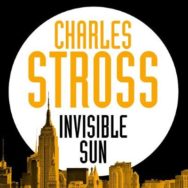 Invisible Sun concludes Charles Stross’s Empire Games trilogy, where two versions of America are locked in a cold war. This is a chillingly resonant dystopian vision.Two twinned worlds are waiting for war . . .America is caught in a deadly arms race with the USA, its high-tech, parallel world. Yet it might just self-combust first. For its president-equivalent has died, leaving a crippling power vacuum. Without the First Man’s support, Miriam Bernstein faces a paranoid government opponent. He suspects her of scheming to resurrect the American monarchy. And Miriam is indeed helping the exiled American princess. This is only to prevent her being used against them, but her rivals will twist anything to ruin her.However, all factions will face a disaster bigger than anything they could imagine. In their drive to explore other timelines, hi-tech America has awakened an alien threat. This force destroyed humanity on one version of earth – and if they don’t take action, it will do the same to both of their timelines.Invisible Sun follows Empire Games and Dark State. This trilogy is set in the same vividly imagined world as Charles Stross’s Merchant Princes sequence.

Plenty of fun — Locus on Dark State When intrigue, politics and suspense are so well executed, it doesn't matter which realm, dimension or timeline the participants hail from. Add to that a sense of mischief, wit and humour and Charles Stross gives you the full package — Chris Brookmyre on Empire Games Mind-boggling, complex and truly brilliant — Daily Mail on Empire Games High-octane thriller action, mixed in with personal drama and some fantastically sympathetic characters — Starburst on Dark State Sheer brilliance: when Stross is in this mood, nobody else comes close — Kirkus starred review on Dark State Stross's ferociously imaginative world-building is on full display here . . . few other writers can match him for humour, creativity and sheer density of ideas — SFX on Empire Games

Charles Stross was born in Leeds, England, in 1964. He has worked as a pharmacist, software engineer and freelance journalist, but now writes full-time. Stross has won two Hugo awards and been nominated multiple times. He has also won the Locus Award for Best Novel, the Locus Award for Best Novella and has been shortlisted for the Arthur C. Clarke and Nebula Awards. In addition, his fiction has been translated into around a dozen languages. His novels include the popular Merchant Princes, Laundry Files and Empire Games series. Stross lives in Edinburgh, Scotland, with his wife Feorag, a couple of cats, several thousand books, and an ever-changing herd of obsolescent computers.