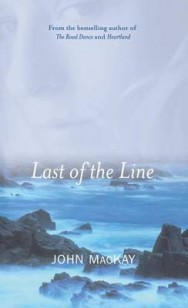 Home > Fiction from Scotland > Last of the Line

Last of the Line

With both his parents dead, his aunt Mary is his only remaining blood link. He leaves the fast-paced life of the city for the Outer Hebrides, where traditional values and beliefs are adhered to and respected. It is a life he neither belongs to nor understands. When she goes he will be the last of the family line and he couldn’t care less. Family and history are just bonds to tie him down. Reluctantly, he sets out to do his duty and stumbles across questions that challenge everything he ever knew about himself and the people from whom he came. In the days between his aunt’s death and funeral he is drawn into the role of genealogy detective. In a place where everyone knows everything about everybody, Cal finds that secrets are buried deep. Mairi, a young widow, knows far more than she is willing to tell. Kate Anna, his aunt’s lifelong friend, avoids his questions. And what of Finlay, who lays claim to the house? Cal begins to understand that Aunt Mary was not the woman he knew and the secret she kept hidden for so long means he might not be the person he thought he was.”Last of the Line” is a story that explores the part in all of us that wants to know who we are and where we are from.

Reviews of Last of the Line

'Where MacKay differs from most other Hebridean-based novels is in his obvious research into the geography, and meticulous background into island traditions and cultures.' THE STORNOWAY GAZETTE 'The Hebridean scenes are powerful.' THE SUNDAY HERALD 'There is a tightly plotted story here, together with some lovely details of remote island life.' THE INDEPENDENT 'A Strong modern story of personal conflict' NORTHWORDS NOW

John MacKay was born in Glasgow in 1965 and has drawn on the oral traditions of his Hebridean background to write this Hebridean set trilogy John MacKay is a journalist and newsreader for STV and presents Scotland Today (6-6:30pm Mon-Fri on STV).