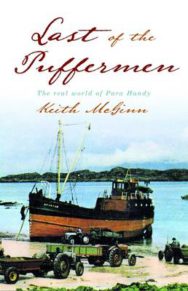 Home > Biography and Autobiography > Last of the Pufferman

For any fan of the exploits of Para Handy and the motley crew of the Vital Spark, this memoir is not to be missed. Keith McGinn’s capers on the puffers off Scotland’s West Coast are funnier than Neil Munro’s tales at times, but they are also sadder too. The thing is, all of these stories are true. McGinn worked on those puffers, man and boy, for nearly 40 years and this is his story. He was there. Neil Munro’s tales are classics and part of Scottish comic folklore, but they are a hundred years old. There have been faux tales published in recent times that have attempted to recreate Munro, but this is the real McCoy – or rather, the real McGinn. There have also been various books and histories of the puffer trade but what has been lacking in them is the real story of the men who worked on these famous little Scottish ships. The story from their perspective is not known to many. They were men who could tell the tale of what it was really like to deliberately beach the boats, to discharge a coal by shovel and ‘bucket’, to sail the Minches in the dead of winter and occasionally repair to the pub for some relaxation.The puffer trade came to a sad end in 1994 but from 1966 untill then Keith McGinn saw the trade through to its demise. He began as a deckhand on one of the traditional 66-ft ‘classics’ and ended his career as a master on a 600-tonne coaster all the while taking the necessities of life to the remote Highlands and Islands of Scotland. Keith McGinn does not glamourise this life but his story is full of tales of good humour and the special camaraderie of the puffermen. Nor does he minimise the tragedies and dangers of a life at sea in some of the most treacherous waters in the world. This is a tale well told, and well illustrated with rarely seen pictures of the puffers at work, by someone who has a gift for telling it the way it really was.

Reviews of Last of the Pufferman

An excellent account of a now vanished and very hard way of life.The author,while not totally dispassionate, gives a fair account of what must have been a very tough life.Despite that toughness he obviously enjoyed the life and the people that it brought him into contact with … I love the Para Handy tales but this book is already higher in my estimation than those. It is that good. Review by Sam Maxwell on Amazon

Keith McGinn worked on the puffers for nearly 40 years and had first-hand knowledge of all aspects of the industry until its demise in the 1990s. He collected his memoirs of the puffer trade to enable him to publish them in his retirement.