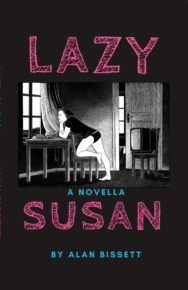 This could be the best or worst weekend of Susie Q’s life, depending on her choices.

Follow one of the most original voices you’ll hear in literature this year as she tries to navigate 48 hours of the party scene… with your help.

Alan Bissett is a novelist, playwright and performer from Scotland. He lives in Renfrewshire. He was born in Falkirk in 1975. David Bowie’s ‘Space Oddity’, re-released, was at Number One in the charts that week. He grew up in Hallglen, a housing scheme on the outskirts of Falkirk and the setting for much of his later work. He attended Hallglen Primary School, Falkirk High School and Stirling University, where he received a First in English and Education. During the summers he worked as a labourer at the Grangemouth petro-chemical plant. After graduating he worked very briefly as an English teacher at Elgin Academy, before going back to Stirling University and achieving a Masters degree in English. He supported himself by working part-time in Waterstones bookshop and around that time was short- or longlisted for the national Macallan / Scotland on Sunday Short-Story Competition four times in a row (1999, 2000, 2001, 2002). He also published his debut novel about growing up in Falkirk.