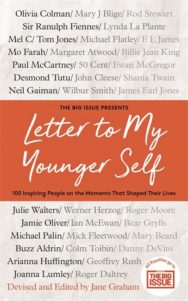 Home > Biography and Autobiography > Letters to My Younger Self

Letters to My Younger Self

Devised and edited by Jane Graham

If you could write a letter to your younger self, what would it say?

Over 10 years ago, The Big Issue began to ask some of the best-known, most interesting and most successful figures in entertainment, politics, food, sport and business to give advice, offer hope and share a few jokes with their younger selves. They opened up, in ways they never had, to interviewer Jane Graham, reflecting on their lives and themselves with affection, sympathy and sometimes disbelief.

Letter to My Younger Self is a revelatory and profound exploration into the wit and wisdom that age brings, and of the unique insights that looking back can reveal.

All royalties from the sales of this book go to The Big Issue to continue their work dismantling poverty and promoting social justice.

Books editor Jane Graham is an arts journalist. As a BBC radio producer, she worked on Radios 1, 3 and 4 and Radio Ulster, with John Peel, Kirsty Wark, Mary Anne Hobbs, Ricky Gervais, and Steven Nolan. She has written for The Guardian, Uncut, The Sunday Times and The Scotsman and was a Belfast Telegraph columnist for ten years. She makes regular appearances on Radio Scotland. She has also worked closely with libraries and was Scotland’s first Reading Ambassador for CultureNL.