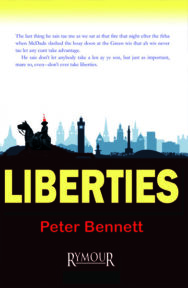 GLASGOW 1998: Arthur Coyle is seventy-one, having tragically lost his son and shortly thereafter, his wife, he feels alone in the world; a relic from a bygone age when things were simpler, when people understood the order of things, and respect for those that had come before you was universal. He only wants some of the same whilst running down the clock until his own time inevitably
comes.

His best friend, Tam O’Henry, and his pride and joy—his grandson, Danny—are what keep him going. However, after falling on hard times, and too proud to ask for help, Tam succumbs to the offer of a loan from a local gangster and quickly spirals into a world of intimidation and torment at the hands of the ruthless Harry Mullin and his associates.

Danny Coyle is twenty years old. He lives with his mother, just the two of them, his father having died when he was a child. An intelligent young man, he’s the first of the Coyles to be accepted to university. His time there is short-lived though, and he finds himself on the dole with his loyal, but miscreant friends. Gaining employment, to his initial displeasure, he ultimately finds a father figure in his boss, Joe. The dynamic is complicated with Joe’s revelation that he too knew Danny’s father, and knows the secret behind his death.

PETER BENNETT is a working class writer from Glasgow now living in East Kilbride. He is committed to writing in the Scots dialect of his native Glasgow. Liberties is his first completed work of prose.