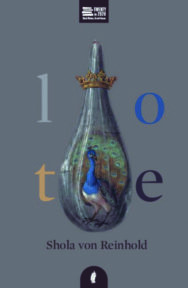 Lush and frothy, incisive and witty, Shola Von Reinhold’s decadent queer literary debut immerses readers in the pursuit of aesthetics and beauty, while interrogating the removal and obscurement of Black figures from history.

Mathilda has long been attuned to the aesthetics of her environment, and enamoured with the Bright Young Things of the 20’s. Her Transfixtions culminate when she uncovers a ‘forgotten’ Black Scottish modernist poet, Hermia Drumm. As she endeavours to unearth everything she can about this Black Princess, she enrols in an artist residency dedicated to opposing extravagance and aesthetics.

From abnegating Thought Artists, champagne theft and Black Modernisms, to art sabotage, alchemy and lotus-eating proto-luxury communist cults, Mathilda takes us on extravagant escapades in her attempts to uncover systems of erasure and embody ephemeral ideals of fluidity and beauty long held captive.

Shola von Reinhold is a Scottish socialite and writer. Shola has been published in the Cambridge Literary Review, The Stockholm Review, was Cove Park’s Scottish Emerging Writer 2018 and recently won a Dewar Award for Literature. Shola is a recent graduate from the Creative Writing MLitt at Glasgow which was completed through the Jessica Yorke Writing Scholarship and has previously studied Fine Art at Central Saint Martins. Shola has also written for publications including i-D, AnOther Magazine.