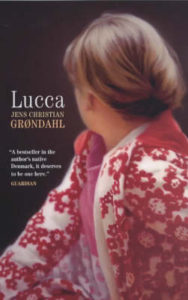 Lucca Montale, a 32-year-old Danish actress, is rushed into hospital after a motor accident. She is severely injured after a head-on collision with a lorry. Robert, the doctor responsible for treating her, is obliged to break the news that she may never see again. Robert and Lucca are both suffering the after-effects of love. He has sought refuge in controlled resignation since his divorce. She has rushed into dramatic, desperate acts. Grondahl masterfully deploys a dual narrative, switching with astounding insight between the stories that the two protagonists relate to each other.

* Grondahl's prose is electrically charged… A winner all the way The Times * an extraordinarily well-written and well-observed novel; a piece of fiction both profound and haunting. — Scarlett Thomas Scotland On Sunday * His propensity for philosophical turns of phrase, which in the hands of a lesser writer might seem forced, here seems entirely appropriate to the novel's reflective mood. Lucca is already a bestseller in the author's native Denmark' in Anne Born's luminous translation, it deserves to be one here. — Christina Koning The Guardian * Very occasionally one comes across a writer who has the power irrevocably to alter one's perspective. Jens Christian Grondahl is one such… It is a testament to the imaginative power of a novelist who leads his readers with masterly assurance through the impenetrable mazes of the heart. — Jamie Jauncey The Scotsman

Jens Christian Grondahl is one of the most celebrated and widely read writers in Europe. Born in Denmark in 1959, his literary work includes thirteen novels, essays and several plays. Three of his novels, Lucca, Silence in October and Virginia, were published by Canongate to outstanding acclaim. His fiction has been translated into sixteen languages, and he has been the recipient of numerous awards, including the Booksellers’ Golden Laurels for Lucca.