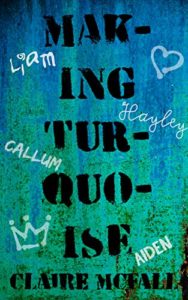 When I was eleven, green was my favourite colour. That was before I realised my nose was blue. It was also the year I met Liam. Right from the off, we were best friends. Then more. Then… nothing. Because Tim and Hun, they’re oil and water: they don’t mix. Ask my dad. Ask Aiden. But blue, green, they’re just colours. And I like green. 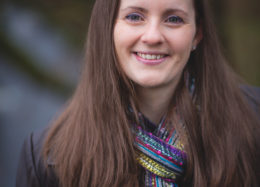 Claire McFall is a Scottish writer and former English teacher now living in sunny Colorado. Her first book, FERRYMAN is a love story which retells the ancient Greek myth of Charon, the ferryman of Hades who transported souls to the underworld. The novel won the 2013 Scottish Children’s Book Awards and was long-listed for the UKLA (UK Literary Association) Book Awards, as well as being nominated for the Carnegie Medal. TRESPASSERS (2017) and OUTCASTS (2019) complete the series. Her second novel, BOMBMAKER, was released by Templar Publishing in February 2014 and deals with terrorism and survival. BLACK CAIRN POINT, released in the UK by Hot Key Books, won the inaugural Scottish Teenage Book Prize and is a paranormal thriller. It was released in the US by Source Fire Books as THE LAST WITNESS in January 2020. Claire has been published in more than fifteen languages and her novels have sold more than three million copies worldwide.