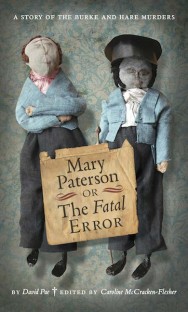 Home > Fiction from Scotland > Mary Paterson, or, the Fatal Error

Mary Paterson, or, the Fatal Error

Mary Paterson, or, The Fatal Error is a high-Victorian tale of the tragic life, and sorry end, of poor Mary Paterson: her fall from grace, her unhappy loves – and her final grisly demise at the hands of Burke and Hare, who kept Edinburgh’s anatomists supplied with freshly manufactured corpses. But the melodrama doesn’t stop with Mary lying cold upon the dissecting slab: David Pae’s galloping novel, originally serialised in the Dundee People’s Journal in 1864 and 1865, hounds Burke and Hare to their capture and trial, leads Burke to the gallows, and thereafter follows Hare and his accomplices to their various just deserts. The Scottish writer David Pae was one of the most successful serial novelists of his day. Edited by Caroline McCracken-Flesher, this new edition of Pae’s original and unexpurgated tale not only provides a fascinating window into the popular Victorian imagination but is also a highly entertaining novel in its own right.

David Pae was one of the most successful novelists of the nineteenth century. His exciting tales were serialised in numerous newspapers across Britain, stirring and shaking the population over their toast and kippers and helping to shape the popular Victorian imagination.