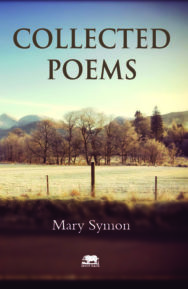 Mary Symon’s Scots poems, notably those dealing with the First World War, are relatively well-known and often anthologised, yet have been unavailable in print for some time. The only volume of her work, Deveron Days, published during her lifetime (and re-issued shortly after her death) is almost impossible to find for sale, and few copies exist even in libraries. This new edition of her collected poems with an introduction to her work is, therefore, timely.

Mary Symon was born in Dufftown, Banffshire in 1863 and seldom strayed far from home although her work, championed by Hugh MacDiarmid and others, has a universal appeal. Many of her poems deal humorously with small town life, but it was the stimulus of the First World War, during which her homeland, the Cabrach, and her local regiment, the Gordon Highlanders, endured a massive loss of young lives, that sparked her finest work which can readily be compared with other, better known, North-East poets such and Marion Angus and Violet Jacob.