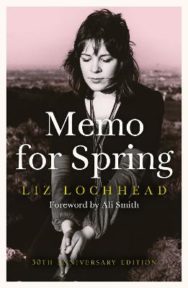 Liz Lochhead is one of the leading poets writing in Britain today. This, her debut collection, published in 1972, was a landmark publication. Writing at a time when the landscape of Scottish poetry was male dominated, hers was a new voice, tackling subjects that resonated with readers – as it still does. Her poetry paved the way, and inspired, countless new voices including Ali Smith, Kathleen Jamie, Jackie Kay and Carol Ann Duffy. Still writing and performing today, fifty years on from her first book of poetry, Liz Lochhead has been awarded the Queen’s Gold Medal for Poetry and was Scotland’s second modern Makar, succeeding Edwin Morgan.Memo for Spring is accessible, vital and always as honest as it is hopeful. Driving through this collection are themes of pain, acceptance, loss and triumph.

'A voice so fresh and relevant that it broke new ground, paving the way for the likes of Ali Smith, Jackie Kay, Kathleen Jamie and Carol Ann Duffy' * The Sunday Post * 'An inspirational presence in British poetry – funny, feisty, female and full of feeling' — Carol Ann Duffy 'This is the work of a highly intelligent, sensitive, perceptive, and humorous young woman' — George Mackay Brown

Liz Lochhead was born in Motherwell in 1947. While studying at the Glasgow School of Art she began to write seriously, gradually losing her way with her initial dream of becoming a painter. Her first book of poetry, Memo for Spring, was published in 1972 and sold 5,000 copies. The Scottish-Canadian Writers Exchange Fellowship,1978-9, marked her transition to full-time writer. She has since published several plays and poetry collections including A Choosing and most recently Fugitive Colours, and is proud to be Honorary President of the Scottish Poetry Library. Liz Lochhead was Scots Makar from 2011-2016.Ali Smith was born in Inverness in 1962. She studied at the University of Aberdeen and Newham College, Cambridge. Her first book, Free Love and Other Stories (1995) won the Saltire First Book of the Year award and a Scottish Arts Council Book Award. Her novel Autumn was shortlisted for the 2017 Man Booker. She lives in Cambridge.