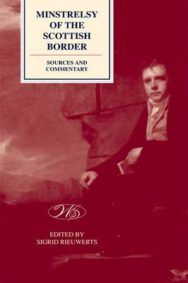 ‘Minstrelsy of the Scottish Border’

This critical edition of Scott’sMinstrelsypresents a seminal 19th-century work for a 21st-century audience The first volume in this three volume set contains all Scott’s ballad texts with his introductions and notes together with an introductory essay on Border history and an essay on fairy tradition and popular superstition. The essay provides valuable context to the 52 ballads published in 1802, which are printed in full within this volume.Key Features: Presents the first modern critical edition of Scott’s ballads and songs Provides insight into the oral and the literate culture of Scotland at a critical point of transition between the two Reveals the roots of Scott’s impact on Romantic perceptions and on the creation of an imagined Scotland Settles the question of authenticity: identifies the relationship of Scott’s published versions of each ballad to the sources and parallels available to Scott, mainly in manuscript

Professor Sigrid Rieuwerts is Reader in the Department of English and Linguistics (British Studies) at Johannes Gutenberg-Universitat Mainz. She is the General Editor of B.A.S.I.S: Ballads and Songs – International Studies and B.A.S.E: Ballads and Songs – Engagements both for Wissenschaftlicher Verlag Trier (WVT), the editor of The Ballad Repertoire of Anna Gordon, Mrs Brown of Falkland (Scottish Text Society, 2011) and co-editor, with Dace Bula, of Singing the Nations: Herder’s Legacy (WVT, 2007), with Roger deV. Renwick, of Ballad Meditations: Folksongs Recovered, Represented, and Reimagined (WVT, 2006), with Helga Stein, of Bridging the Cultural Divide: Our Common Ballad Heritage (Olms, 2000), and with Tom Cheesman, of Ballads into Books (Peter Lang, 1999).