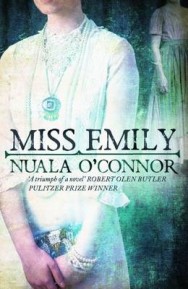 The Dickinson household is saved from domestic chaos with the arrival of Ada Concannon, a “neat little Irish person, fresh off the boat”. Amherst in the 1800’s is a pastoral environment for the homesick young maid who finds in the gifted middle child, Emily, a fellow feeling; they were born on the same day, they share a sense of mischief and a love of baking. Emily’s fledgling poetry and passion for words is her true vocation but as it begins to dominate her mind, she retreats from the small world around her and enters her infamous White Phase. The friendship that forms between the two women is tested when Ada’s personal safety and reputation is violated and Emily finds herself tasked with defending her maid against her own family and those she loves, with shocking consequences.

'Secrets will always out. In the same way as Emily Dickenson's poems were once the best kept secret in Massachusetts, Nuala O'Connor's luminous prose has long been one of Ireland's most treasured literary secrets. Now through her superb evocation of 19th century Amherst, an international audience is likely to be held rapt by the sparse lyricism and exactitude of O'Connor's writing. Through a fusion of historical ventriloquism and imaginative dexterity, O'Connor vividly conjures up – in the real-life Emily Dickenson and the fictional Ada Concannon – two equally unforgettable characters who pulsate with life in this study of the slowly blossoming friendship between a delicate literary recluse and a young Irish emigrant eager to embrace the new world around her.' Dermot Bolger, award-winning playwright and author of THE JOURNEY HOME, THE VENICE SUITE 'Like a Dickinson poem, Miss Emily seems at first a simple story of friendship, but gradually reveals itself as a profound meditation on the human condition. O'Connor accomplishes this unfolding, just as Dickinson did, with her exquisite use of language. I lost myself in the beautiful detail of 1860s Amherst, a cast of characters that leapt off the page with life, and the constant reminder that words, properly wielded, can transcend time, transmit love, and, above all, inspire hope.' Charlie Lovett, author of The Bookman's Tale 'Beautifully written and utterly compelling, this vivid portrait of Emily Dickinson examines her humanity, complexity and profound relationship with words. Told in her own eloquent voice and that of her trusted maid, Miss Emily deftly braids together the stories two intriguing women in this highly accomplished novel.' Cathy Marie Buchanan, author of The Painted Girls 'A superb novel, I was captivated from the first page. With gorgeous, compelling period detail and graceful prose, Nuala O'Connor reimagines a friendship between one of our greatest poets and her Irish maid. With uncanny insight into the expected portrayal of a servant-mistress relationship, and in keeping with the power and beauty of Dickinson's poetry, O'Connor celebrates her women with great delicacy and exuberance.' Kathleen Grissom, NYT bestselling author of THE KITCHEN HOUSE 'Nuala O'Connor's Miss Emily is evocative, thought-provoking, and beautifully rendered; a poignant portrait of two very different women, drawn together in unlikely friendship by a common strength of spirit and mind. Readers will delight in this richly imagined glimpse into the worlds–both inner and outer–of the immortal Emily Dickinson.' Allison Pataki, NY Times Bestselling author of The Accidental Empress.

Nuala O’Connor was born in Dublin in 1970 and lives in East Galway with her family. She is a well-regarded short story writer and novelist in her native Ireland. Please see her website for more details of her previous work www.nualanichonchuir.com. She has never been represented or published in the UK before. Nuala has won many fiction awards including RTE radio’s Francis MacManus Award, the Cuirt New Writing Prize, the Jane Geske Award (USA), the inaugural Jonathan Swift Award and the Cecil Day Lewis Award. She was shortlisted for the European Prize for Literature. I am attaching some reviews of her past work.