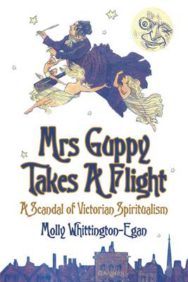 Mrs Guppy Takes a Flight: A Scandal of Victorian Spiritualism

Many moons ago, in the high Victorian era, Mrs. Guppy, the famous medium, was enjoying a sparkling success. Over the rooftops of Bloomsbury she sailed, was infused through lathe and plaster, and clambered on to tables in the darkness, magicking down showers of apports. Night after night, once the lights were extinguished, and the damped fires had died in the grates, the seance could begin in plush and mahogany drawing-rooms. The O of her mouth in speaking trances was a portal to the spirit world. Her lidded eyes were flickering sensors. The floating paper trumpets were channels to catch the direct voices of the departed. Curtained cabinets were entrances to the unknown land. There, in the thrilling, breathing gloom, decked out in merging black gown, portly, not ethereal, Mrs Guppy, silently, deftly, tripped her own fantastic dance in little, pointy, soft, boots. Definitely invisible, for none ever spotted her, and very nearly noiseless – once, she set a chandelier a-tinkling – she glided behind the bowed heads of her awestruck sitters, and dispensed upon the table a cornucopia of gifts and symbols, apports, from the spirits; animal, vegetable and mineral.Wings swooped and birds burbled; doves were released. Lights darted and twinkled. Auditory effects, tactile feelings, stroking, prickling, oriental smells, made temporary schizophrenics of solid citizens. She was a sensation. Sadly, though, she was a fake medium, or a cheat, as they called it then, deliberately and in full consciousness employing techniques and devices in order to deceive others that she was in contact with the dead. She was lucky, or exceptionally talented: no lurking sceptic ever managed to expose her, to put up the light prematurely, snatch off a veil, or disclose a mask or waxen body part, as was happening to her rivals. In her palmy days, at the beginnings of the British craze for spiritualism she was a maker of miracles, and her name is still remembered. Her private life, obscured to those who believed in her, was curious, and based on fundamental lies. This is her story, finally brilliantly exposed and researched by criminologist Molly Whittington-Egan. It is the story of a brilliant lifelong conwoman and prestidigitateur.