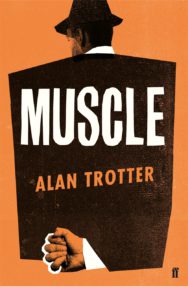 A mind-bending slice of pulp fiction, which takes a traditional noir story of detectives, toughs and femmes fatales and pushes it to the limits of our imagination.

In a hard-boiled city of crooks, grifts and rackets lurk a pair of toughs: Box and _____. They’re the kind of men capable of extracting apologies and reparations, of teaching you a chilling lesson. They seldom think twice, and ask very few questions.

Until one night over the poker table, they encounter a pulp writer with wild ideas and an unscrupulous private detective, leading them into what is either a classic mystery, a senseless maze of corpses, or an inextricable fever dream…

Drunk on cinematic and literary influence, Muscle is a slice of noir fiction in collapse, a ceaselessly imaginative story of violence, boredom and madness.

Alan Trotter is a writer based in Edinburgh. Muscle, his debut novel, was awarded the inaugural Sceptre Prize for a novel-in-progress. His short fiction has appeared in Somesuch Stories, Under the Influence, McSweeney’s Internet Tendency and elsewhere. He has a PhD in English Literature from the University of Glasgow – his dissertation concerned writers making unusual use of the form of the book.