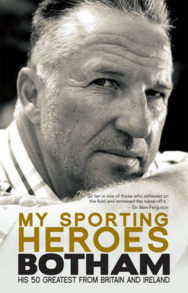 Home > Biography and Autobiography > My Sporting Heroes: His 50 Greatest from Britain and Ireland

My Sporting Heroes: His 50 Greatest from Britain and Ireland

In My Sporting Heroes, one of the country’s great sportsmen, Sir Ian Botham, draws up his template of what he believes makes a true sporting hero. Botham singles out the ten qualities he believes are the basic elements in any true sportsperson – bravery, passion, composure, determination, skill, leadership, instinct, dedication, humour and compassion – then highlights the sportsmen and women who he believes best demonstrate each quality, backing up his selection with personal anecdotes of his time spent with them or watching them in action. Covering a wide variety of sports and discussing admired athletes of both the past and present, from Ian Woosnam, Paul Gascoigne and Jonathan Davies to Joe Calzaghe, Lewis Hamilton and Andy Murray, My Sporting Heroes is a lively celebration of exactly what makes a true sporting legend – from someone who knows a thing or two about it!

Reviews of My Sporting Heroes: His 50 Greatest from Britain and Ireland

"A genuinely absorbing read" Spin "Botham's insights and personal anecdotes put the seal on a light, informative and often humorous read, which undoubtedly deserves pride of place on any sports-buff's book shelf" City AM "If you've ever wondered what it would take to excel in a sport, this book will give you a fair indication" All Out Cricket

Sir Ian Botham OBE is a former England Test cricketer and Test team captain whose playing career lasted from 1976 to 1993, and he still holds the record for the highest number of wickets taken by any England bowler. Widely known by the nicknames ‘Beefy’ and ‘Guy the Gorilla’, Botham was knighted in 2007 and has authored two autobiographies, most recently Head On. He is now a writer and cricket commentator, and is regularly involved in charity work.