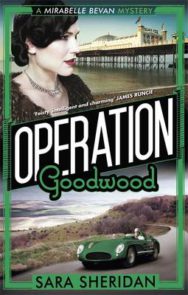 1955. When Mirabelle Bevan is rescued from a fire at her home on the Brighton seafront she’s lucky to escape unharmed – but the blaze takes the life of her neighbour, Dougie Beaumont, a dashing and successful racing driver living in the flat above. It soon becomes clear that this was arson, raising questions about the young man’s death that Mirabelle can’t resist investigating further. With her curiosity piqued and on the trail of a potential killer she finds herself taking on the mysterious world of Fleet Street with its long lunches and dodgy deals as well as the glamorous motor racing world at Goodwood. It gradually becomes clear to Mirabelle that Dougie Beaumont’s life was not as above-board as it first seemed and that this talented man had many secrets, hidden when he was alive by his international lifestyle where he was constantly on the move. Then, when a second shocking murder takes place, Mirabelle’s pursuit is frustrated first by Dougie’s well-connected and suspicious family and then by the official investigation – led by her would-be lover Superintendent McGregor.With the help of her colleague at McGuigan & McGuigan Debt Recovery, Vesta, and some of her ex-intelligence service connections, Mirabelle discovers the dark secrets of the glamorous racing driver have ramifications far beyond the English coastline.

Sara Sheridan never fails to surprise. Unfailingly stylish, undeniably smart, Miss Bevan is destined to bring the exploits of the past to the best-seller lists of the present Daily Record Beautifully realised vivid characters, both heroes and villains, the atmospheric Brighton setting and plot that zipped along at a lovely pace left me in no doubt that Sara Sheridan and Mirabelle Bevan are a crime force to be reckoned with Goodreads Beneath that prim exterior lies a fearless, fly-by-the-seat-of-her-pants kind of gal. One part Nancy Drew, two parts Jessica Fletcher, Mirabelle has a dogged tenacity to rival Poirot Sunday Herald

Sara Sheridan was born in Edinburgh and studied at Trinity College, Dublin. She has received a Scottish Library Award and was shortlisted for the Saltire Book Prize. Sara blogs on the Guardian site about her writing life and puts her hand up to being a ‘twitter evangelist’. She also speaks on BBC Radio, most recently on Radio 4’s From Our Own Correspondent, and mentors writers for the Scottish Book Trust.