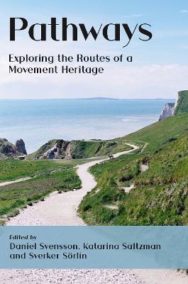 Pathways: Exploring the Roots of a Movement Heritage

PATHWAYS TO THE PAST, AND THE FUTURETrails and paths are pathways to the past – and serve as a physical and cultural infrastructure of human memory. While they lead the way forward for anyone out walking, they also point backwards, towards history. Walking has been a common denominator for human life everywhere, at all times. While other forms of mobility have grown in importance and changed our societies in dramatic ways, most of us still depend on walking in our daily life. The massive number of human steps throughout history has created a rich and widespread network of trails that cross the globe and connect places. It has also resulted in a vast immaterial heritage through literature, art and music about walking. Paths and trails accommodate both the material and the immaterial, and challenge not only conventional heritage management but also the very essence of the nature/culture divide.In the Anthropocene, traces of people’s movements can be regarded as a distinct kind of cultural heritage, a ‘movement heritage’ that is dependent on continuous use or memory work to remain. It also points to historical and current forms of land use that is sustainable in the most basic meaning of the word, i.e. that these activities can be and de facto has been practiced over long periods of time without causing large- scale environmental degradation. Few other forms of human mobility can make similar claims.The volume formulates an expansion of the landscape heritage through one of its most defining practices, movement by foot. This heritage is physical in the shape of paths, trails and effects on vegetation, but it is also a local memory landscape or life world with great significance, and it is increasingly digital as it appears in computer games and mobile images. It engages in dialogue around several cases in different regions that show how trails and paths can be, and have been, a resource in and for the heritage sector and for sustainable landscape management. It analyses how this movement heritage is articulated, and what type of historical, literary, and mediated accounts that are used in the process.Chapters deal with narrative aspects of walking and trails, through literature, sound and art, often way beyond the beaten track; focus on digital walking, in computer games and walking simulators; zoom in on walking and trails as heritage and as tools for sustainable development; and demonstrate how paths are also part of an endless co-creation of heritage, as we go.

Daniel Svensson has a Ph.D. in history and is an Associate Senior Lecturer at the Department of Sport Sciences, Malmoe University. His research is mainly within the fields of sport history and environmental history, with focus on environmental issues in sport and outdoor recreation. Svensson’s dissertation (awarded the International Ski History Association Ullr Award 2017) focused on the scientisation of training methods in endurance sport and meetings between scientific and experiential knowledge in sport during the twentieth century. Svensson lives in the countryside in West Sweden and is proud father of two daughters with whom he loves to go for a walk.Katarina Saltzman is associate professor in Conservation at University of Gothenburg, Sweden. In her research she has investigated nature/culture relations and heritage making from an ethnological point of view, often in transdisciplinary collaboration. Her research areas include contemporary vernacular practices such as gardening, rural landscape management and recreational walking, with particular focus on the landscapes where these and other activities are taking place. She has carried out field studies in rural, urban and semi-urban environments, including intensively tended private gardens and agricultural landscapes as well as transitory and temporarily leftover places at the urban fringe.Sverker Soerlin is Professor of Environmental History at the Division of History, KTH Royal Institute of Technology, Stockholm, where he was also a co-founder with Nina Wormbs of the KTH Environmental Humanities Laboratory (2011). He has a long-standing career as scholar and writer focusing on the science and politics of natural resource extraction and climate change. He has also published widely on representations of landscape and its significance in the formation of national and other identities. His seminal collection on the history of out of doors in Sweden (Friluftshistoria, with Klas Sandell) had a second edition in 2008. Increasingly working on ‘elemental’ Earth-, Cryo- and Atmospheric narratives and histories, his most recent book is Ice Humanities: Living, Thinking and Working in a Melting World (Manchester 2022, with Klaus Dodds).