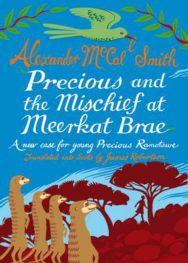 Precious and the Mischief at Meerkat Brae: A Young Precious Ramotswe Case

Itchy Coo and Black & White Publishing are delighted to present a new case for the young Precious Ramotswe, translated into Scots for the very first time. Well before Precious Ramotswe founded her Number One Ladies Detective Agency, as an eight-year-old girl she was already solving mysteries. Here, in this delightful, new, enchanting tale for children, we see how the young Precious became the crafty and intuitive private investigator we know and love. In “The Mischief at Meerkat Brae”, Precious befriends a new boy to her school called Pontsho and his sister Teb, and when she goes to their home for the first time, she discovers that they have an unusual pet, a very clever meerkat called Kosi. Then, when Pontsho and Teb become very upset when their cow goes missing, Precious decides to use her detective skills to solve the mystery but soon finds that all is not quite as simple as it seems on Meerkat Brae…

Alexander McCall Smith was born in Zimbabwe and educated there and in Scotland. He has written over 60 books for children and adults, including the hugely successful No. 1 Ladies’ Detective Agency series. He has an interest in languages and in the protection and development of those under threat, and it is for this reason that he has generously allowed the story of Precious Ramotswe’s earliest cases to be translated into Scots, the language of Lowland Scotland. James Robertson is a co-founder of Itchy Coo. He writes books for both adults and children, in English and in Scots. His novel The Testament of Gideon Mack was long-listed for the Man Booker Prize in 2006 and featured on the Richard and Judy Book Club in 2007. For Itchy Coo he has translated Roald Dahl’s The Fantastic Mr Fox and A.A. Milne’s Winnie-the-Pooh into Scots.