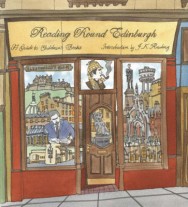 Home > Travel > Reading Round Edinburgh: A Guide to Children’s Books of the City

Reading Round Edinburgh: A Guide to Children’s Books of the City

‘My love affair with writing in this city culminated in having the book launch of the sixth “Harry Potter” at Edinburgh Castle, easily my favourite launch so far’ – J. K. Rowling. ‘A glimpse of a lit room as one passes by is like seeing a little tableau. I don’t want to be invited in and shown it in detail. I only want an impression. My imagination can do the rest’ – Joan Lingard, author of “The Sign of the Black Dagger” and “Tilly and the Badgers”. ‘Did you know that if Robert Louis Stevenson had never written “The Strange Case of Dr Jekyll and Mr Hyde”, there might be no big, green, angry superhero called the Hulk? In fact, there’s a good chance we wouldn’t have an evil Jedi Knight called Darth Vader either’ – Keith Gray, author of “The Runner and Creepers”. ‘I decided to poke gentle fun at some of the ladies who’d lived beside us. I turned them all into one Mrs McKitty. These ladies all wore hats from Jenners, and were afraid of nothing and no one. And of course they all had the famous Morningside ‘Panloaf Accent’!’ – Aileen Paterson, author of the “Maisie” books.From its secret underground streets to the top of Arthur’s Seat, the city of Edinburgh has been the inspiration for many children’s books and writers. This unique guide will help children and adults to discover Edinburgh through its children’s books – and to discover new books and writers through their city. With full-colour, child-friendly maps for different areas of Edinburgh, the book can be used as an informative walking guide around Edinburgh, or read as a fascinating overview of the city’s rich contribution to children’s literature. The contributors to the book represent the cream of Edinburgh children’s writing, from Joan Lingard and Mollie Hunter to Keith Gray, Gill Arbuthnott and Nicola Morgan. Each writer talks about why Edinburgh is such a perfect setting for their work, and introduces the area closest to their heart. There’s also an Introduction by J. K. Rowling. This book is a great present for children (and their families) who live in Edinburgh, or who are visiting the city. It is also a required purchase for libraries as the definitive guide to Edinburgh’s literature for children.

Reviews of Reading Round Edinburgh: A Guide to Children’s Books of the City

'The beautifully illustrated book runs from Greyfriar's Bobby to the streets that inspired Robert Louis Stevenson's eerie classic, Dr Jekyll and Mr Hyde.' — Tim Cornwell, The Scotsman, Tuesday 17th April 2007 'Read about Edinburgh's murky past, find out which areas inspire their inhabitants or simply enjoy dipping in and out of this fascinating book.' — Carousel, Summer 2007 'A literary guide with a difference.' — Teen Titles Magazine, Issue 39 'I thought this was a really good guide to Edinburgh … I like the personal quotes in the book from authors such as J K Rowling – I really could picture her sitting writing Harry Potter.' — Gavin Todd, Craigmount High, for Teen Titles Magazine 'This was a really helpful book! The maps are clear and colourful and easy to understand.' — Emma McDougall, Craigmount High, for Teen Titles Magazine 'Wandering around the town in such company, hearing their memories of Edinburgh and what had inspired a particular story makes this book less of a guidebook and more like a personal visit in the company of friends. Despite living in Edinburgh all my life I discovered a new appreciation of the city through other eyes … This book is worth a visit even if you cannot make the trip to Edinburgh itself.' — Armadillo, Autumn 2007 'There are at least as many stories as bricks in this labyrinthine city. This small book, dense with historical information, quotations from children's fiction, photos, drawings and bold, simplified maps, does an excellent job of compressing at least a sample of these stories between its pages. It ranges beyond the world of children's books, though more than 30 living members of the trade contribute entertaining comments and extracts from their work … I can recommend the book highly to both visitors and residents, on the grounds that it's given me plenty of freshly informed inspiration for future walks in streets I've been roaming for several years.' — George Hunt, Books for Keeps, November 2007 'Reading Round Edinburgh is an attractive 80-page guide which will help children and adults alike to discover our capital through its children's books.' — The Scots Magazine, December 2007 'The reader is stimulated by photographs and humorous drawings in this light-hearted and delightful exploration of Edinburgh. There are biographical details of the contributing authors, useful pointers to visitor attractions and an index all for GBP5.99' — Wendy Axford, The School Librarian, Winter 2007 'With Edinburgh bursting with writers from Joan Lingard to Keith Gray, Reading Round Edinburgh is an invaluable guide to exploring the city, or simply for dipping into. Discover where Nicola Morgan did gruesome research for her book Fleshmarket, in the Royal College of Surgeons' Museum (strong stomachs needed!) Or walk down the High Street, background to so many books.' — Carousel, Summer 2009