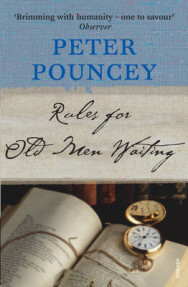 MacIver, military historian and one-time centre for Scotland’s rugby team has holed up in his holiday home after his wife’s death. He makes rules to keep himself going, as he and his house crumble away – what he must burn, when he should eat, how to write something everyday…As he becomes involved in his story about soldiers in the trenches of the Great War he begins to reflect on his own experiences in WWII and the loss of his son in Vietnam, and attempts to make sense of his life and he trubulent era through which he has lived.

Born in China of British parents, educated at Oxford, Peter Pouncey is a classicist and academic who moved to the US in the 1960s and is now President Emeritus of Amherst College. This is his first novel.