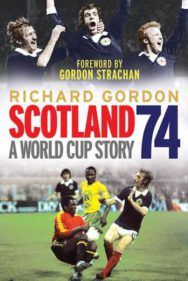 For a small footballing nation, Scotland boasts a proud record of having qualified for the World Cup Finals on eight occasions. But this fantastic record is also tarred with the glorious failure of never having reached the latter stages of the tournament. Scotland ’74 is a bitter-sweet celebration of the closest Scotland has ever got – so far at least – when a team of superstars managed to snatch defeat from the jaws of victory in the dying seconds. Forty years on, it still hurts. For Scotland, the World Cup Finals in West Germany in 1974 promised much. Group 2 had a talented Brazil side with Jairzinho, Rivelino and Cesar, a hard-to-pronounce Yugoslavia line-up and group minnows Zaire. But the Scotland squad boasted household names like Billy Bremner, Kenny Dalglish, Denis Law, Peter Lorimer and Joe Jordan. How could Scotland not get to the second phase of the tournament for the very first time? Well, this is the story of how, astonishingly, it just didn’t happen – even though Scotland ended up as the only unbeaten team in the tournament.As history tells us, 1974 was a massive missed opportunity for Scotland, and Richard Gordon now reveals how it all went wrong in the days before the shambles of Argentina ’78 and the 3-0 humbling by Morocco in 1998. Drawing on archive reports and the memories of squad members, Scotland ’74 relates the story of that big adventure, encompassing a shocking start to manager Willie Ormond’s reign (a 5-0 beating by England), frequent player indiscipline, and, ultimately, the on-field heartbreak that left a nation in mourning for a lost opportunity.

Richard Gordon is the long-time presenter of BBC Radio Scotland’s Sportsound and a life-long Aberdeen FC fan. His passion for football was sparked by the 1970 Scottish Cup semi-final, his beloved Dons winning that day and going on to beat Celtic to lift the silverware. He followed the club throughout their glory years and remains a passionate supporter in these less successful times. He lives in Glasgow.