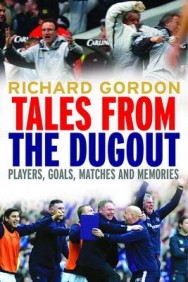 Tales from the Dugout

The dugout was first introduced in the 1930s. Until then, football managers stood by the touchline or, more often than not, sat in the stand, but the new innovation allowed them to get closer to the action, to try to better influence the play. It also pitched them into the heat of the battle, with predictable results. Put a calm, apparently sane manager into a dugout, or technical area, for the ninety minutes of competitive action, and they are regularly distorted into irrational agitators, ready to contest and debate every decision, no matter how minor. Arguing with officials, the opposing coaching staff – on occasion leading to physical confrontation – supporters, and even their own players; gesticulating wildly, often to no great purpose; making scribbled notes, bellowing opinions and bemoaning injustices to anyone who catches their eye. And as the temperature rises, there are the inevitable humorous, and at times simply unbelievable, consequences.Tales From The Dugout is a collection of memories gathered from managers, players, referees and linesmen, supporters and broadcasters which encapsulates the unique environment of the technical area and reveals how even limited exposure to it can transform characters unrecognisably. It gives an insight into the flashpoints and controversies that have erupted over the years, and explains why that small area by the side of the pitch is not a place for the faint-hearted.

Richard Gordon is the long-time presenter of BBC Radio Scotland’s Sportsound and a life-long Aberdeen FC fan. His passion for football was sparked by the 1970 Scottish Cup semi-final, his beloved Dons winning that day and going on to beat Celtic to lift the silverware. He followed the club throughout their glory years and remains a passionate supporter in these less successful times. He lives in Fintry.