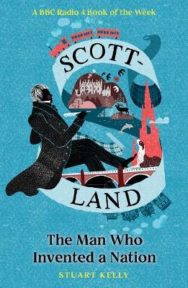 Home > History > Scott-land: The Man Who Invented a Nation

Scott-land: The Man Who Invented a Nation

His name and image are everywhere – from Bank of Scotland fivers to the bizarre monument in Edinburgh’s city centre. Scott-land presumes that the reader will have only a hazy awareness of Sir Walter Scott, and, although Stuart Kelly will offer insights into Scott’s works and biography, this is emphatically not a conventional literary biography, nor is it a critical study. Partly a surreptitious autobiography – Stuart Kelly was born near Abbotsford – his examination of Scott’s legacy and character come to change his own thoughts on writing, reviewing, being Scottish, and being human.

Reviews of Scott-land: The Man Who Invented a Nation

'In a smart, refreshingly uncynical book, Kelly examines Scott, Scotland and himself in an intelligent, lively analysis of a great small country' — Ian Finlayson * The Times * 'Kelly engagingly assesses Scott's various works and insightfully sets Scott in his context' * Independent * 'A lovely piece of work – the best book on Scott, indeed, since Edwin Muir's Scott and Scotland' — Andrew O'Hagan

Stuart Kelly was raised in the Scottish Borders and studied English at Balliol College Oxford, gaining a first class degree and a Master of Studies. He was the Literary Editor of Scotland on Sunday and is now a freelance critic and writer.